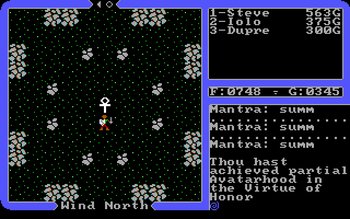 Whew! Only 7 more to go...
Advertisement:

Some authors see the concepts of good and evil in morality as too abstract or poorly defined. One way to deal with this problem that has been used many times is to simply divide the abstract concepts into the separate moral qualities that seem to make up "goodness" and "evil". What results from this process is a system of virtues and vices.

A virtue is a positive moral quality. Individual virtues are treated as only aspects of goodness, and no virtue alone is enough to form a good character. Similarly, each virtue has a corresponding vice which represents either the diametric opposite of the virtue or its complete absence. Also, extrapolating any single virtue to its extreme at the expense of all others also usually leads to subversion; virtues in a system are dependent on one another and must be weighed against each other in order to function as intended.

Virtue systems often appear in religion, where the virtues usually are regarded as downright sacred, and often roads to rewards in the afterlife. One classical system of religious virtues from history is the Seven Heavenly Virtues and their counterparts the Seven Deadly Sins, both sprung from Christianity.

This is the trope for works that define or otherwise deal with such a system, religious or otherwise, in order to form a moral narrative.

Since the focus of virtues lies on inspiring us to do the right thing in the here and now, even when it comes to seemingly minor everyday decisions, the virtue-centric hero is usually a Small Steps Hero.

When featured in video or tabletop games, virtue systems often takes the form of scorekeeping scales that represent a protagonist's prowess in a certain virtue. The player's actions in the game will add to or subtract from the player's virtue scores. These scores themselves may be anywhere from fully visible to completely hidden to the player, but they are sure to have some kind of effect on the gameplay. Sometimes they affect whether NPCs react positively or negatively towards the Player Character, for instance. Character trackers of this kind are particularly common in computer-based role-playing games, especially of western origin.

See the Analysis subpage for a more detailed examination of both existing and hypothetical examples of such systems. For virtues commonly found in unsympathetic characters, see Evil Virtues. For the narrative pattern where virtues or vices are allegorically associated with characters or other in-story entities, see Embodiment of Virtue and Embodiment of Vice, respectively.