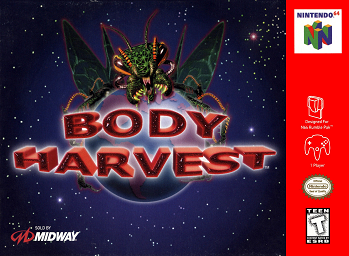 Station Omega: Earth Orbit: 2016. The Earth lies in ruins. Over the past 100 years a vast alien invasion has harvested mankind to the brink of extinction. High above the dead planet, the last survivors hatch a desperate plan to halt the invasion at key points in the Earth's past. A prototype time travel device is ready. It's crew, a team of genetically enhanced super soldiers, is being prepared. But time has run out. The aliens have returned. And they're hungry...
—Opening crawl
Advertisement:

Body Harvest is a 1998 proto-sandbox game developed by DMA Design (now Rockstar North) and published by Gremlin Interactive and Midway Games for the Nintendo 64. It is a spiritual predecessor to the Grand Theft Auto seriesnote its 3D entries, anyway; the first game in the GTA series was released a year before.

The plot goes as follows: An insectoid alien race has harvested humanity over a period of 100 years starting in 1916, using shields to prevent anyone from leaving or entering the harvested country. The story begins when the aliens try to wipe out the last humans survivors on the space station Omega in the year of 2016. The player character, Adam Drake, escapes but not before being wounded by one of the boarding aliens. He manages to get into the Alpha 1 and is transported to 1916's Greece, where the game starts.

It is quite notable for introducing many of the elements now used in most 3D wide open sandboxes. It is possible to explore the environment at will and do the objectives in non-linear orders. Many vehicles (planes, boats, cars) can be used to explore the land and complete the missions. It isn't quite a sandbox however: the interaction with the environment and NPCS is limited, there are no real side-missions and most of the landscape is unavailable if you don't progress in the plot. Rockstar would later take the ideas introduced here and refine them in Grand Theft Auto III. The rest is history.