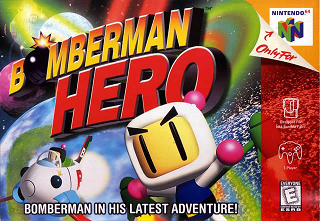 Bomberman Hero is a 1998 installment in the Bomberman franchise for the Nintendo 64, and the second Bomberman game on the console after Bomberman 64.

The game follows our hero on a mission to rescue Princess Millian from the evil Garaden Empire. He is assisted occasionally by plucky robot companion Pibot, Ridiculously Cute Critter Louie, and a quartet of new vehicles as he explores six planets, some familiar and some brand new. So yes, the story is just Bomberman meets Star Wars.

Hero, unlike most Bomberman games, is a straightforward action Platform Game, and it is one of the few Bomberman games that allows the titular hero to jump freely. This is partially due to the game originally being planned as a new addition to the Bonk series, until it was decided the game should be focused on Bomberman.