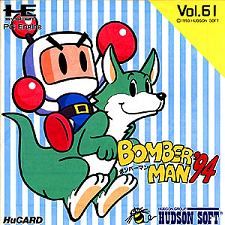 Bomberman '94 is a 1993 installment in the Bomberman franchise for the PC Engine, the follow-up to Bomberman '93 and a predecessor to Super Bomberman 3. The game introduced series mainstays Rooi the kangaroo-like creature, and Buggler/Bagular/Buglear, the franchise's primary Big Bad.

In 1994, the game was ported and localized as Mega Bomberman for the Sega Genesis / Mega Drive. Despite being on a more powerful console, the port had inferior graphics, and multiplayer only supported up to four players instead of five even though the console was capable of five players with the right MultiTap. Due to these flaws, it is passed up in favor of the original Japanese version for worldwide re-releases, including the Wii Virtual Console, PlayStation Network, Windows 8.1 via the Windows Store, the Wii U Virtual Console and the PC Engine Mini / TurboGrafx-16 Mini.

Then in 2008, Bomberman '08, a mobile remake of '94, was released which had completely redone graphics in the style of modern Bomberman games. The remake was once thought to be lost to time until a Bomberman Board member found the files for a Windows Mobile port (renamed Bomberman) and released them in 2017.