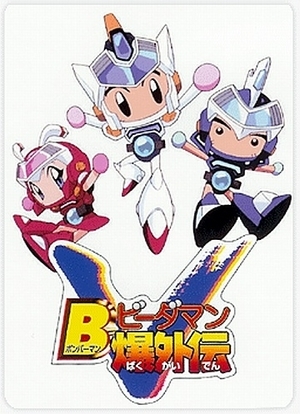 A manga and anime series based on both the Bomberman videogame franchise and the B-Daman toy franchise (which was originally Bomberman-based to begin with). despite having only five manga volumes (the anime adapting the latest three), each volume followed its own continuity, though based on the same group of archetipal characters (Shirobon, Aobon, Akabon, Kiirobon, Kurobon and Doctor Graybon).

Series III was about Prince Shirobon, who found his father was possessed by an evil spirit and had created the evil Nol Arc empire, so he joins the Nereid rebel army. A failed attempt of Dr Graybon to send a secret weapon, the Planet Energy Circuit, ends transmitting the planet energy on Shirobon, rebellion members Akabon and Aobon, space cabbie Kiirobon and three other bombers they must find to complete the circuit and defeat the empire.

Series IV is about Shirobon, who has the dream of flight. He meets Dr Graybon and his grandson Aobon, who have come to the town in order to stop evil beings who will soon to be freed from their imprisonment. They are also joined by Kiirobon and Akabon, and Shirobon gets a mecha that allows him to fly.

Series V is about cops Shirobon and Aobon, who rescue Princess Akabon and make her join them. Their mission is to stop the evil Devilvader from getting powerful jewels called Crysmonds, that are scattered in time. King Vader, the Devilvader leader, gives to the Three Devil Musketeers Akumanto, Dokudandy and Gestra the mission to retrieve the Crysmonds. There's aso a delivery guy, Kiirobon, who wants to join Shirobon's team, to no avail.

While the characters are cosmetically Bombermen, that's about the only link to the actual Bomberman franchise. Bakugaiden shares far less other aspects with the games than the later Bomberman Jetters, to the point of the Cartoon Bomb being eschewed in favor of energy blasts from the blue marbles in their bodies!