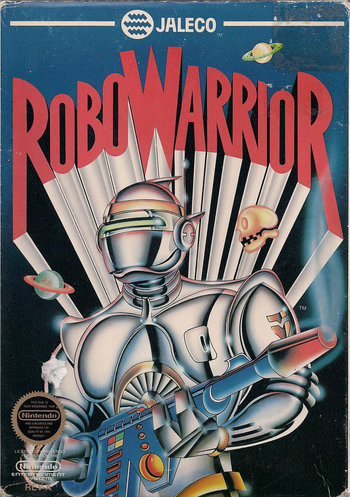 Robowarrior, known in Japan as Bomber King, is an English language action/puzzle video game developed by Aicom and published by Hudson Soft in Japan and Jaleco in the U.S. and Europe.
Advertisement:

War, overpopulation and pollution have plagued Earth, so humanity decides to construct an artificial planet known as Altile and move there. Unfortunately, Altile gets invaded by the evil Xantho Empire, who deactivate the planet's Weather-Control Machine and turn it into a barren wasteland. The people of Altile seek help from Earth and call upon the Z-Type Earth Defense cyborg (ZED) in order to save their planet from destruction.

ZED starts out with two weapons to use against the Xantho Empire, a weak, standard ray gun and extremely powerful exploding bombs. He can get more power-ups as he destroys enemies and blocks, as well as finding hidden areas to obtain some of the rarer power-ups. Even with a large assortment of weapons, this game is still notorious for its hard difficulty.