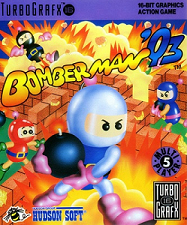 Bomberman '93 is the second installment of the Bomberman TurboGrafx-16 trilogy, released in 1992. It was followed in 1993 by Bomberman '94.

Black Bomberman and six accomplices steal seven vital chips from the pan-galactic bureau's mother computer, shutting it down. The pan-galactic federal police sends emergency order to its NO.1 super detective, Bomber Cop (better known as White Bomberman), to give chase and retrieve them.

The game is currently available to purchase from the Wii Virtual Console, along with Bomberman '94 and Bomberman Hero.