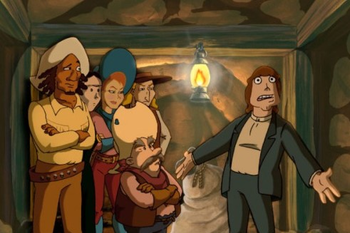 Party Wagon is a 2004 TV Movie Pilot from Craig Bartlett (creator of Nickelodeon's Hey Arnold! and brother-in-law to Matt Groeningnote the guy who brought you Life in Hell, The Simpsons, Futurama, and Disenchantment) that was aired on Cartoon Network.
Advertisement:

The movie takes places during the days of the Oregon Trail and follows Randall P. McDuff, a homeless teenager on the run after he ran out on his wedding (and obviously can't go back for fear of repercussions from his bride's family). While trying to cross a river, he meets wagon owner Bumpy Snits, his daughter Ornery Sue, rambunctious cowgirl Subliminy Jill and travelers Romeo Jones and Lewis Clark Jefferson.

During a disastrous ferry crossing, the group come into possession a treasure map which leads to the famed jewel mine, El Glitterado, which was fished off a shady peg-legged passenger named Three-Eyed Jack who ended up going over a waterfall. In the scuffle to claim it, the map is torn by all parties and, as neither is willing to give up their piece, the group agree to work together to get to their goal. Of course as one can expect with clashing personalities, they can barely avoid trying to kill each other as they head to their destination while following a wagon trail and getting into misadventures. Along the way they find orphan brothers Billy and Toady Bartly, survivors of a destroyed wagon train, who join their trek. There's also the fact that Three-Eyed Jack isn't as dead as thought...

A very obscure piece of animation. The movie was only shown twice on Cartoon Network and was screwed over, being put in horrible time slots with Invisible Advertising. It was hoped to be picked up for a series, but CN ultimately passed on it and the movie wasn't seen for eight years, only finally appearing on Youtube in 2012. It should be noted that this series is much more mature than Hey Arnold! due to the (at the time) looser censorship of Cartoon Network and the fact that nearly all the main characters are adults or entering adulthood (save for the orphans).

More than 15 years later in 2019, Randall P. McDuff made a very surprising and unexpected cameo in the Series Finale of OK K.O.! Let's Be Heroes "Thank You For Watching The Show".

The movie can be viewed in it's highest definition here.