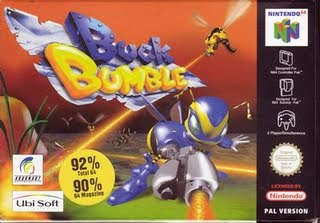 "Right about now it's time to rock with the biggedy Buck Bumble"
-The game's title theme.

Buck Bumble is a game for the Nintendo 64 developed by Argonaut Software and released in 1998 by Ubisoft. You play as the titular Buck, a cyborg bumblebee enlisted by The Resistance, a peace keeping force for the garden the game takes place in, to eliminate the threat of the Herd Army, a band of mutant bugs who seek to conquer the garden, then move on to the rest of the world. The game was known mostly for its incredibly catchy theme

, as well as being a cult classic, getting mostly decent reviews.