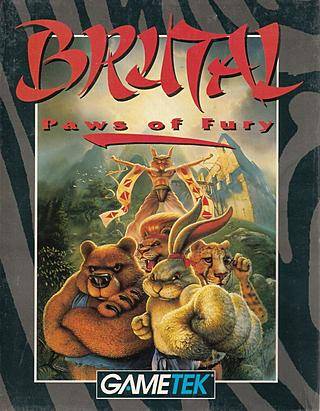 A little-known Fighting Game designed by GameTek Inc. in 1994 and developed by them and Eurocom. It features a creature known as the Dali Llama (no relation to the real person) funding a large martial arts tournament in a world of anthropomorphic animals. The cast is made up of the Llama as the final boss, plus Kung Fu Bunny, Prince Leon (a lion), Rhei Rat, Tai Cheetah, Kendo Coyote, Foxy Roxy, Ivan the Bear, Pantha, and Karate Croc. The sequel added Psycho Kitty and Chung Poe (a mole who can turn into a bat-dragon hybrid). The game was released on the Amiga, Mega Drive/Genesis and Mega/Sega-CD, and later the Super Nintendo. An Updated Re-release, marketed as a sequel (called Brutal Unleashed: Above the Claw), was released to the 32X and PC in 1995. A fairly simple fighting game, it got middling reviews (though few bad ones), and despite being released on nearly every major system at the time, it failed to make a dent in the already-overcrowded fighting game market.

No connection to Paws of Fury: The Legend of Hank.