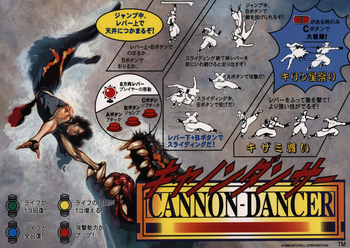 Cannon Dancer (known as Osman in English) is an Arcade Platform Game released by Mitchell Corp. in 1996, and it's often called the Spiritual Successor of Capcom's Strider (Arcade) (which is reinforced by the fact they both were designed by the same guy). Controlling a badass mercenary known as Kirin, the player goes through very colorful stages, kicking everything into gory death along the way. Kirin has an asortment of special skills, including a slide, Izuna Drop esque throw, and upgrades that allow him to generate energy copies of himself, which stand where they are generated and mimic his actions, making for some interesting tactics and strategies with them.

The game's plot is actually a bit Mind Screwy, albeit a good deal of it was actually Lost in Translation (including a slew of alternative dialogues for the bosses). Set in a dystopian future ruled by a single government, problems arise with the appearance of a terrorist sect known as "Slaver," which deifies one "God Without Form" by the same name. Director of Judicial Affairs Jack Layzon, tired of these guys, contracts the services of the main character to deal with them, but he's secretly only using Kirin to stir up trouble with them so he gets a legit reason to arrest the cultists. Once his job's done, Jack betrays Kirin and dumps him into a desert to die. Needless to say, Kirin survives and sets out on a quest to get Revenge on Layzon, though he'll have to go through all his troops, as well as his former allies who now want him dead. Things start getting really weird from that point onward...

The game's main characters are:

The game's garnered a sort of cult following over the years, and is slowly crawling into Cult Classic territory.