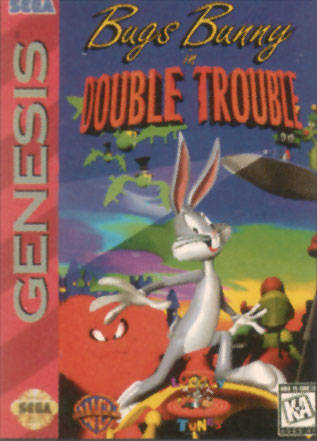 After a tiring day of doing his usual routine, Bugs Bunny decided to lay down in his cozy bed, falling asleep in the process. He then begins to have a very strange dream, where he finds himself in a Haunted Castle. There, he spotted Yosemite Sam (as a Mad Scientist) working on an experiment, called the "giant carrot serum". However, Sam caught sight of the rabbit and ordered Gossamer to retrieve his brain to complete his robot experiment, and chase ensues. Bugs soon found himself in a brightly lit room, where he finds the scientist's Televisor device. Curious, he decides to activate it, sending him to many of his times from classic cartoons, and the adventure begins.

Essentially Warner Bros. and Sega's answer to Mickey Mania, with levels based on and (mostly) named after classic Bugs Bunny cartoons from the Looney Tunes and Merrie Melodies series, though Double Trouble received a more negative reception, not helped by being released late in both the Genesis and Game Gear's lifespans.