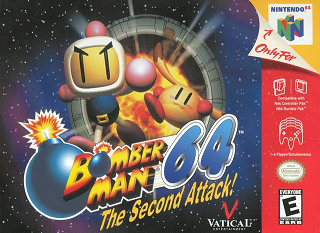 Bomberman 64: The Second Attack! is the third game in the Bomberman franchise for the Nintendo 64, released in 1999 as a sequel to Bomberman 64.

While celebrating his victory over the invaders in the previous game on the hot springs planet Ksa2, Bomberman finds a mysterious egg and decides to take it with him. On his way home, however, Bomberman's ship gets sucked into a black hole, and he wakes up to find himself in jail with the aforementioned egg, which suddenly hatches into a tiny creature named Pommy.

Bomberman and Pommy soon learn that the evil Rukifellth and his BHB Army have been collecting powerful artifacts known as the Elemental Stones. The only one they're missing now is the Fire Stone — the very one that Bomberman uses to create his bombs. With no other choice left to them, Bomberman and Pommy set out to fight the BHB Army's Astral Knights, taking their Elemental Stones so they can't be used for evil and destroying the Gravity Generators that power the black hole that trapped Bomberman in the first place.

The game plays largely like Bomberman 64, with several additions/upgrades:

Pommy also marks the introduction of the Charabom/Karabon mechanic to the series. Feeding him different types of food will improve his abilities, eventually resulting in him changing into a new form. This would be expanded upon in later games, particularly in Bomberman Tournament and Bomberman Generation in the form of Charabom battles and Charabom fusion, and Bomberman Jetters in the form of Charaboms evolving as they level up.