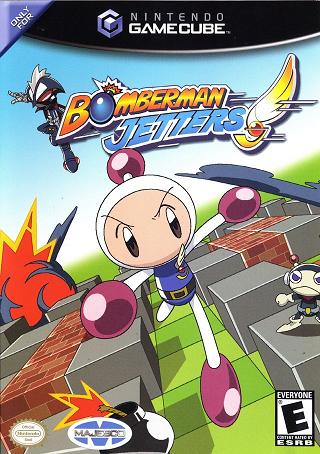 "Are you there? White Bomber? It seems you require more training…"
Advertisement:

Bomberman Jetters is the 2002 video game adaptation of the Bomberman Jetters anime, which is in itself an adaptation of the video game franchise. In the game, the Hige Hige Bandits send the Dark Star, a planet-sized rocket, hurtling towards Planet Bomber. White Bomber is sent by the Jetters to the Dark Star to deactivate the rocket's engines and foil the Hige Hige Bandits' plot. White Bomber is joined by occasional rival MAX and the Pokémon-like Charaboms.

This game is literally all of Bomberman Jetters that Western audiences got to see, which no-doubt confused many a Bomberman fan (who's Shaut/Birdie/Bongo/Gungu…?). Anyone who was familiar with the anime before the game would have been confused as well: The localized game follows its own plot, makes no reference to the series, and changes MAX's role back from villain to hero, to say nothing about the dialogue and voice acting.

Gameplay-wise, Bomberman Jetters plays like a watered-down Bomberman Generation. The controls are the same, the difficulty is mostly scaled back, you hold less power-ups (one less each for bombs and speed), you find most Charaboms just standing around and only use them for one specific function, there are no Charabom battles and almost no minigames, and there's noticeably less graphical power in the game's engine. However, if you enjoyed Generation's gameplay but not so much its difficulty, you'll probably get some fun out of Jetters. Same if you found some humor in Generation's silly voice acting: Jetters has that in spades (assuming you can put up with your teammates).