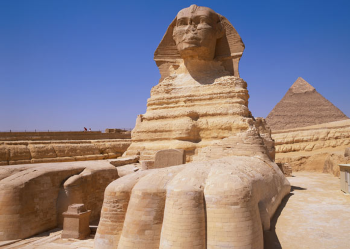 A colossal statue in the form of a lion with a human head wearing an ancient Egyptian headdress (and which may or may not have originally been a normal lion head), The Sphinx is one of the best-known manmade structures in the real world. It is so closely associated with Egypt that it serves as an instant visual clue of the setting, even more so than The Pyramids (since pyramids also exist in other parts of the world). The Sphinx is located next to the Great Pyramid of Giza, the largest one in the world.

This Sphinx has nothing to do with the riddling one from the Greek Myth of Oedipus. Rather, the Greeks called the statue (which is more than 4,000 years old) the Sphinx due to its resemblance to that monster. However, the Sphinx is considered "riddling" because, even today, we don't know who made it or why; even more puzzling, there are no surviving records from that time that explain these things. Naturally, that has led to lots of crazy theories about it.

It is famously without a nose. Popular History attributes this to Napoléon Bonaparte's cannons accidentally shooting it off during the brief French occupation of Egypt (1798-1801), but in reality the nose was most likely hacked off by a 14th-century Muslim religious fanatic (who was hanged for vandalism by the Sultan in response).

In fiction, often the target of Monumental Damage or even Monumental Theft. Or just getting off its duff and stomping on people.