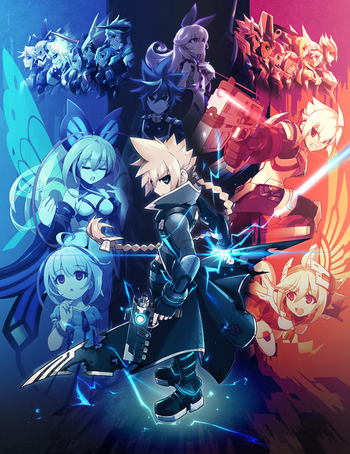 Azure Striker Gunvolt (Armed Blue: Gunvolt in Japan) is a series of 2D Action-Platformers in the vein of the Mega Man Zero and Mega Man ZX games developed and published by Inti Creates with input from Keiji Inafune (of Mega Man and Mighty No. 9 fame). It is Inti Creates' first self-published title and multimedia franchise.
Advertisement:

In a World… 20 Minutes into the Future, superpowered beings called Adepts have begun to emerge at a rapid pace all across the planet. With the world unable to cope with the sudden influx of meta-humans, Adepts quickly instigate global destabilization of world order. The only country safe from the Adepts' influence is Japan, whose Adept population is kept in check by the Sumeragi Mega-Corp. It is here where the stories of two teens are brought to light, embroiled deep within the heart of the Adept conflict.

Compared to other platformers and side-scrolling action games within its genre, the Gunvolt series takes a unique "easy to learn, hard to master" approach. For more casual players, the games can tend to fall on the easier side due to the numerous safety nets afforded to the player, but for experienced players, the game's unique Scoring Points system, Kudos, challenges players to master the characters and level navigation to their utmost limits to achieve the highest scores possible and claim the elusive high ranks. In addition to standard cutscenes, the games offer a unique storytelling experience called "Story Mode+", where characters continue dialogue and communicate with one another during stages, offering an expanded breadth of worldbuilding and characterization without disrupting the flow of gameplay or story.

Both the first and second Gunvolt games were packaged up together and sold as a Compilation Rerelease called the Striker Pack, released initially for the 3DS and later ported to the Nintendo Switch and PlayStation 4. While the 3DS version was a simple compilation of both games, the Switch and PlayStation 4 version introduces multiple enhancements, such as 60 FPS presentation with HD artworks and all of Gunvolt 2's DLC included with the pack, with the PlayStation 4 release adding an extra song for Lumen.

Gunvolt hit it off enough to be featured in various spinoffs and crossovers, which include: