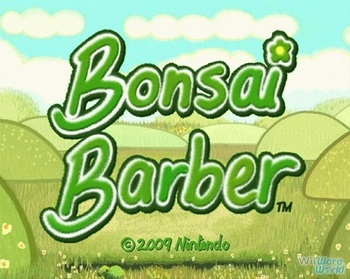 Quite possibly the world's only First Person Groomer, Bonsai Barber puts you in the role of a barber in a village in which most of the residents are anthropomorphic plants. Each day, five people will come in for haircuts, and you must trim, comb, and paint their foliage into all manner of strange shapes, from sailboats to fried eggs. As if that wasn't strange enough, you have to contend with sudden blackouts, swarms of bees, thunderstorms inside your shop, and other strange happenings. Normal barbers don't go through all this!