Video Game / The Simpsons: Bart vs. the Space Mutants 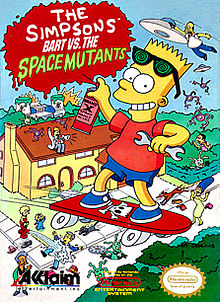 Bart vs. The Space Mutants was released in 1991 for the NES, and was the first Licensed Game based off The Simpsons for that system. It was developed by Imagineering, and also ported to the Sega Master System, Game Gear, Sega Genesis, Amiga and numerous computers.

Bart discovers that his X-Ray specs reveal the presence of Space Mutants hiding in the population of Springfield. These mutants are attempting to power an ultimate weapon which they will use to conquer the world. To stop them, Bart discovers the items they try to fuel it with, then goes all over town getting rid of those things.

Followed by The Simpsons: Bart vs. the World later the same year.