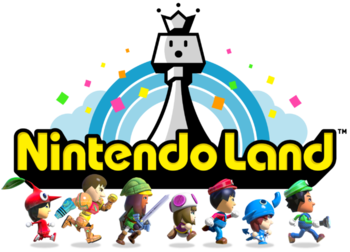 Who are you?
Advertisement:

Nintendo Land is Nintendo's second Massive Multiplayer Crossover and a launch title for the Nintendo Wii U. But instead of having players beat flagship characters to a pulp like in Super Smash Bros., this game takes elements from several of Nintendo's franchises and turns them into theme park attractions. Assuming the role of their Mii characters, players are invited to play along inside this virtual theme park by a robotic screen that looks like the GamePad, named Monita.

Nintendo Land is practically what Wii Sports was for the original Wii, a fun and lighthearted game made to show off what the system was capable of doing, while introducing new players to Nintendo's famed franchises. This game was bundled with the deluxe Wii U set. Otherwise, it had to be bought separately.

This game is divided into twelve sub-games, each having different uses of the Wii U's controller. Three of the games can be played with multiple people playing as a teamnote But can be played solo as well., while three other ones can only be played with multiple people, and some are only played solonote Though you can have friends join in with Wii Remotes to help you. Nintendo describes the multiplayer as "asymmetric gameplay", because of the GamePad's independent screen. Depending on what type of controller you use, your gameplay experience will be different.