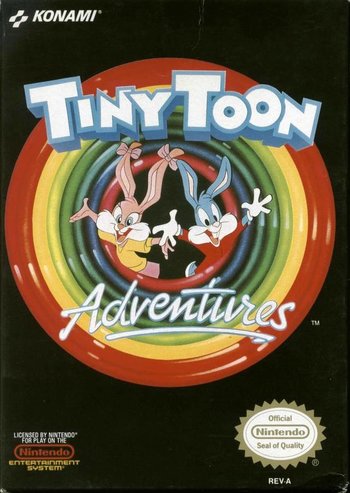 A Licensed Game based on Tiny Toon Adventures, released by Konami in 1991 for the Nintendo Entertainment System.

While watching TV in his burrow, Buster Bunny gets a message from Montana Max, informing him that he's captured Babs Bunny and is planning to feed her to the sharks. Now, Buster has to act fast to save his best friend from becoming fish food. He's not alone in his quest, as his friends, Plucky Duck, Dizzy Devil, and Furrball the Cat are there to assist him.

The game is a platformer where Buster, Plucky, Dizzy, and Furrball have to find five keys hidden in five different worlds. Once they have all the keys, they can use them to unlock the doors in the sixth and final world, Montana Max's Mansion, leading to the final battle with Monty in order to save Babs.