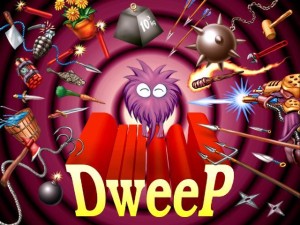 Ah, it's shaping to be a great day!
A 1999 Puzzle Game for PC by Dexterity Software. Dweep is a friendly ball of fur who needs your help in getting to his children. Each level is a little puzzlebox where you need to use inventory items appropriately to get Dweep to the exit while making sure he survives.
Advertisement:

The game was initially released with 30 levels (plus 1 bonus level), with five additional levels included later in version 1.05; there were also two expansion packs. All the maps were eventually collected in one combined release, Dweep Gold.

The game has been discontinued

, and can be found