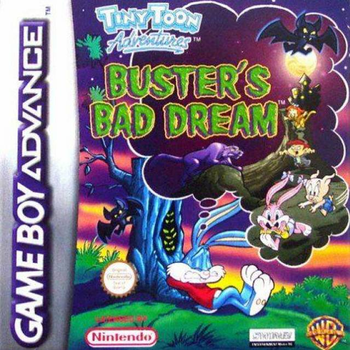 Tiny Toon Adventures: Buster's Bad Dream is a Beat 'em Up for the Game Boy Advance developed by Treasure and released in Europe on 2002. For some reason the North American version under the subtitle Scary Dreams was only released on 2005 in such limited quantities that it was barely noticed by customers.

The game's Excuse Plot starts with Buster Bunny taking a nap in the woods. The mischievous Montana Max blasts him with a strange beam which happens to catch all of Buster's friends, who also happened to be nearby while running from Elmyra. As a result, all seven Funny Animal kids are now stuck inside Buster's head and he must chase Montana across 4 action-packed levels to free them.

It features combat centered around juggling enemies and seven partner characters that can be called upon to help Buster stun enemies or extend his combos. He also has two super moves (a jackhammer to damage ground-bound foes or those who've fallen to the ground, and a shopping cart rush that also makes you temporarily invincible).

Also of note is that the Cult Classic Astro Boy: Omega Factor was built off this game's engine.