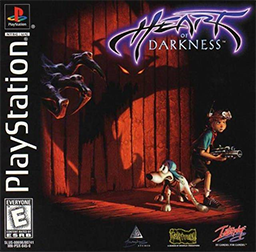 Heart of Darkness is a Cinematic Platformer developed by Amazing Studio for the PC and PlayStation, that came out in 1998.

The game revolves around a boy named Andy with a fear of the dark, who during a solar eclipse gets his dog Whisky mysteriously kidnapped by a dark force. Determined to get his best friend back, he sets out in his spaceship to retrieve him from the alien Darklands to where he was taken.

The gameplay revolves mostly around puzzles, precision jumps, and predicting the environment. Often you'll have access to a weapon, but in some areas you'll be unarmed and have to resort to have to either avoiding your enemies or turning their Malevolent Architecture against them.

Although the game retains an E rating, the game contains a wide array of rather gruesome ways Andy can be killed; and as the infinite amount of lives presented to you suggest, you WILL get killed.

Not to be confused with the Joseph Conrad novella of the same name, or the Victoria II expansion pack.

Heart of Darkness provides examples of: