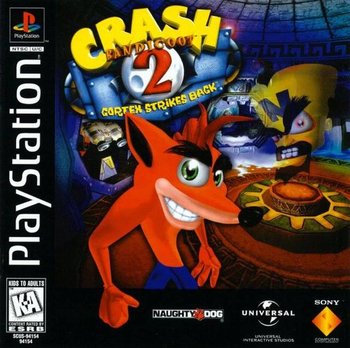 One year after the original game, Dr. Neo Cortex, the Big Bad of the previous game, turns to Crash for help in an effort to prevent the planet Earth from facing certain doom. All the planets in the solar system will align soon, and, according to Cortex, create enough energy to tear the world apart. His solution to the crisis lies in crystals: In the aftermath of the original game, he discovered the Master Crystal, but that alone will not be enough. He needs Crash to collect 25 Slave Crystals scattered through the islands and aboard his space headquarters so he can contain the energy of the planetary alignment and save Earth.

However, Dr. Cortex's former henchman, Doctor Nitrus Brio, has also returned, with a grudge against his former boss. N. Brio would rather have Crash collect 42 Gems instead of the Crystals, in the hopes of destroying Cortex and his space station, the fate of the Earth be damned. To stop Crash, N. Brio has sent out an army of cyborgs, robots, and evolved animal henchmen across the islands.

Using an ancient "Warp Room" as his base, Crash must now go across the islands he explored in the original game (which are now experiencing a harsh winter period

◊) and up aboard the Cortex Vortex, collecting Crystals and Gems, discovering secret Bonus Rooms and other hidden routes, and defeating Nitrus Brio's henchmen.

Crash Bandicoot 2 improves several elements from its predecessor and adds a more player-friendly save feature, a more balanced difficulty, improved graphics, and additional moves. It also marks the introduction of Crash's sister, Coco, who permanently replaces Tawna from the first game.

This game, along with the first game and Warped, were remastered on the PlayStation 4, Nintendo Switch, Xbox One and PC with updated graphics and new features, as part of the Crash Bandicoot N. Sane Trilogy.

Cortex Strikes Back provides examples of: