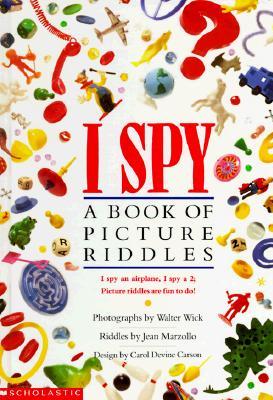 I Spy is a long-running series of hidden object puzzle books aimed at children, by writer Jean Marzollo and photographer Walter Wick. The concept of the books are fairly simple; the reader is given a collection of pictures chock full of items, and they are presented with a riddle that lists off a number of objects that are hidden somewhere in the picture. However, it isn't usually as simple as just finding the item sitting in plain sight; objects will often be hidden inside others (for instance, when it tells you to look for a fish, it might actually be referring to a fish that is engraved in wood), or they'll be used as a decorative set piece cleverly disguised in the scenery.

The series began in 1992 with the release of the book simply titled I Spy, which did not have much of a unifying theme; later on came a multitude of other books, though, such as I Spy School Days which has a classroom theme and I Spy Spooky Night which takes place inside a haunted mansion. It quickly became a huge success and spawned a whole slew of spinoffs aimed at various age groups and even a series of (surprisingly well-made) Licensed Games for various game consoles, but most often the PC. Although main series books are a lot less common nowadays, all of the older books are still in print and still easy to run across in the children's section of your local bookstore, and don't be surprised if you're still running across them in the average elementary school classroom.

It was also adapted into a stop-motion animated series, which aired on HBO Family between 2003 and 2004 for 26 episodes. This show was in a somewhat different format, being an edutainment series, but hidden, random objects still remained a core part (even the main characters are made up of random objects). Wick later went on to create the Can You See What I See? series, which retained the core search-and-find value of I Spy but made it more immersive.

Not to be confused with the spy show of the same name, or the UK "I-Spy" books, which were a series of books about things to look out for in the world around you, along the lines of the Spotter's Guides.

The books in the I Spy series provide examples of the following tropes: