Literature / Can You See What I See? 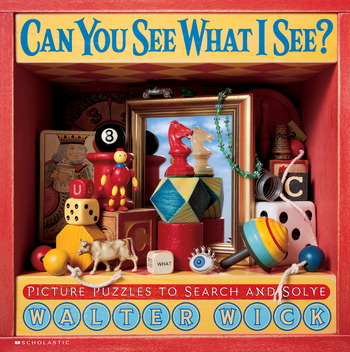 Can You See What I See? is Walter Wick's second search-and-find series after I Spy, started in 2002 and with the last entry published in 2013. In this series, Wick writes all the riddles himself as well as staging the photography. The idea is very much the same as I Spy: the reader is given a photo of a collection of assorted items, along with a rhyming riddle listing off a number of objects hidden in the picture. However, they differ from I Spy in that the last couplet of the riddle always contains an extra challenge. Readers find the listed objects and finish each puzzle by solving a last brainteaser, such as following a maze in the photo, locating all the scattered parts of a disassembled robot, or even identifying mirror illusions.
Advertisement:

Unlike I Spy, Can You See What I See?'s photos tend to follow a linear storyline and feature miniature set pieces instead of simply object collections under a unifying theme. For example, Can You See What I See? Toyland Express tells the story of a toy train, from its beginnings in a workshop to a yard sale and a new life with another owner, and Can You See What I See? Out Of This World tells of a robot from the far future building a time machine and visiting a princess's castle. The series quickly proved to be just as popular as I Spy, spawning multiple spin-off series and Licensed Games for the PC. The books are still in circulation and a mainstay of nearly every elementary-school classroom.

The series is also notable for introducing Seymour, a little man made of beads and string hidden in every photo of every book. In On A Scary Scary Night and Dream Machine, he acts as a guide of sorts and follows the reader around their journey. He later got two books all to himself: Seymour and the Juice Box Boat and Seymour Makes New Friends.

The Can You See What I See? series provides examples of: