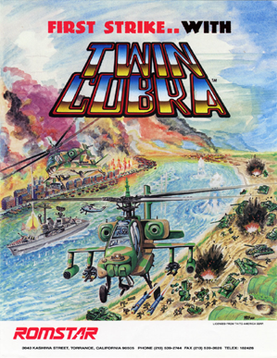 Twin Cobra, known as Kyūkyoku Tiger ("Ultimate Tiger") in Japan, is the second of Toaplan's helicopter-based shooters, after Tiger Heli. The game was first released to arcades in 1987, by Taito Corporation in Japan and by Romstar internationally, and subsequently ported to various consoles and Japanese computers. The plot is minimal, involving your soldier penetrating a fictional country to overthrow its evil dictator before he can invade other nations.

In terms of gameplay, Twin Cobra is a typical Vertical Scrolling Shooter. Players' helicopters take off from carriers to wreak destruction on enemy helicopters, tanks, cannons, airplanes, gunboats, and so forth. Players have a choice of four primary weapons plus bombs that inflict massive damage within their wide blast radius. The primary weapon can be changed by collecting orbs that change color as they float around the screen. These weapons, and their colors, are:

The success of Twin Cobra led to the game being ported to many platforms:

In 1995, one year after Toaplan closed, Twin Cobra II (Kyūkyoku Tiger II) was released. It was developed by ex-Toaplan employees now working for Takumi (who later produced Giga Wing and Mars Matrix). This game was ported to the Sega Saturn in 1997 as Kyūkyoku Tiger II Plus, with a storyline and a few new things added in.