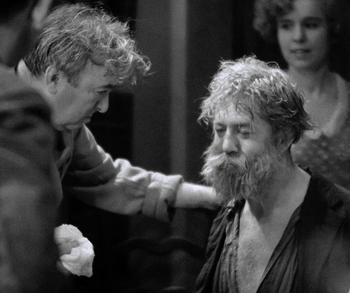 Boudu (Michel Simon) is a scruffy, ragged bum, sleeping in a park by the Seine in Paris. When his dog runs away one day Boudu seems to decide he's had enough of life, and jumps into the river from a pedestrian bridge. While doing so he is spotted by one Edouard Lestingois (Charles Granval), a bookseller with a shop and apartment right across the street. Lestingois dives into the river, fishes out Boudu, and revives him.

Whether out of real generosity or because he thinks it's The Right Thing To Do, Lestingois invites Boudu to stay with the family, which consists of his wife Emma (Marcelle Hainia) and their maid Chloe (Sévérine Lerczinska), who also happens to be Edouard's mistress. Boudu behaves just as one might expect a tramp to do— namely, like a crude, ill-mannered slob. He spits out wine when he doesn't like it, he wipes his shoes with satin sheets, he drinks to excess, he makes crude sexual advances on Emma and Chloe. Edouard can't deal with such a force of nature, while both Emma and Chloe prove surprisingly receptive to those crude sexual advances.

This film was a loose inspiration for the Japanese film Spring Dreams, and was later more faithfully remade in America as Down and Out in Beverly Hills.