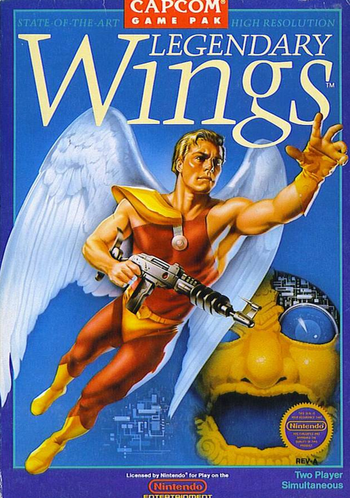 Legendary Wings (The Wings of Ares in Japan) is a fantasy-themed shoot 'em up game from Capcom, released into arcades in 1986 and published in a home version for the Nintendo Entertainment System in 1988. The game is a fairly straight overhead-view SHMUP, with the added twist of special side-scrolling platform sections: this sections are accessed in several instances (they are the last section before any boss, but there are two optional ones: the "Minus Stage" accessed by entering the mouth of giant stone faces and the "Bonus Stage" accessed by destroying a certain statue on the ground) and has the player character walking (or flying) forward while shooting down enemies and collecting treasure chests for points.
Advertisement:

Inspired by the legend of Icarus and Daedalus, the story is set in a distant future, where humanity has been evolving into an advanced civilization thanks to the help of an alien supercomputer known as "DARK". DARK, however, suddenly starts to malfunction and does the exact opposite: Kill All Humans. With humanity at the brink of extinction, the God of War (no, not that one) Ares then decides to interfere and grant two humans magical wings: Michelle Heart is given the Wings of Love, while Kevin Walker the Wings of Courage. Together they take to the skies to fight off DARK and his minions.