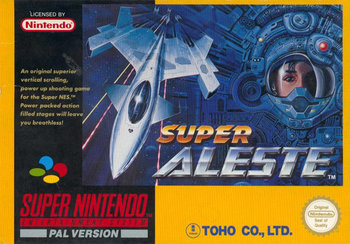 The box art for the PAL version.
Advertisement:

Super Aleste (also known as Space Megaforce in North America) is a Vertical Scrolling Shooter, part of the Aleste series and developed by Compile for the SNES in 1992.

The plot varies by region. The North American version is your typical shmup Excuse Plot: a Featureless Protagonist is sent to stop an alien threat and destroy its homeworld. The Japanese version is a bit more complicated than that.

Either way you pilot a ship known as the Aleste (or ED-057 in the NA version) capable of using one of eight different weapons, each with seven different power levels. Shot types come in all flavors, such as the standard Spread Shot, Frickin' Laser Beams, and a Charged Attack. On top of that, the Shot-Control button can be used to manipulate each weapon in some way.

Super Aleste is very long by shmup standards, with 12 stages each lasting on average 7 or more minutes. However, there is also a "short game" that takes only 4 stages, if you are pressed for time.