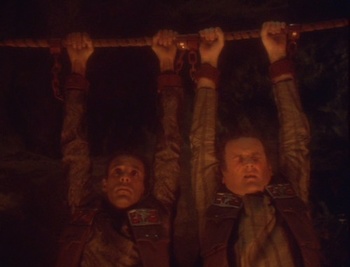 It's been one week since the Federation returned to Deep Space Nine, and things almost feel normal again even though the war is still technically on. Worf and Jadzia find out that Alexander is going to be transferred away from the station, so Jadzia moves up their wedding plans to be held on the station so he can attend. Worf recruits Sisko, Bashir, O'Brien, Alexander and Martok for the Klingon version of a bachelor's party. Meanwhile, Martok's wife, the imperious Sirella, arrives to judge whether Jadzia is worthy to join their house.

Worf's "bachelor party" turns out to be Kal'hyah, a four-day ceremony of pain and endurance. The group is expected to fast, endure brutal heat, shed blood, and pass other tests. Bashir and O'Brien are dismayed. Alexander, who knows little about Klingon culture, is also unprepared. Only Sisko jumps in with gusto, and the others follow his lead. The men endure ordeal after ordeal, refusing to give up.

At the same time, Dax is going through an ordeal of her own. Sirella proves to be an overbearing and harsh critic, castigating Dax for every tiny infraction and repeatedly insisting that an "alien" like her will never find a home in Klingon culture. When Dax throws a bachelorette party, she indulges in wine and revelry. Sirella breaks in on the party and demands that Dax accompany her to perform a ritual, but Dax refuses. The two argue, and Sirella pulls a knife, causing Dax to deck her. The Klingon matriarch officially denies her blessing on the marriage and storms away.

As all of this is happening, Kira and Odo have been avoiding each other. They'd postponed figuring out what their relationship is until after the station was liberated. Now that it is, both sides are hesitant about taking the first step. During Dax's party, Odo arrives to deliver a noise complaint, and Kira decides that now's finally the time. When morning dawns, Dax discovers that the two lovebirds have talked the night away. Upon realizing the time, they both rush off to start their workday.

Worf is called away from his Kal'hyah to try to talk Dax into apologizing to Sirella, but she refuses and calls off the wedding. Sisko arrives, and Dax talks about her unlikely relationship with Worf. At the end, she realizes that she really is in love with him and wants to get married, so she vows to apologize to Sirella. Bashir and O'Brien are just about ready to break their fast when Sisko and Martok arrive to tell them that the wedding is back on, so they must complete the Kal'hyah.

In the end, Worf and Dax are married in a ceremony presided over by Sirella, who proclaims that nothing can defeat a Klingon marriage, even her. As the ceremony ends, Bashir and O'Brien perform their final responsibility as part of the Kal'hyah: attacking the bride and groom.