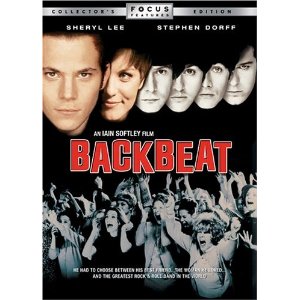 A film about The Beatles in Hamburg — but not simply that. If it were simply that, the first name listed in the opening credits would not be female.

It's really about the love affair between Astrid Kirchherr (Sheryl Lee) and Stuart Sutcliffe (Stephen Dorff). The Beatles are just necessary for Back Story and conflict.

We start in Liverpool. Stuart Sutcliffe and John Lennon (Ian Hart) are at a club; Stu makes a nude sketch of the girl onstage. Some big men confront them. John and Stu leave the club, but the men follow, and we end up seeing Stu pounded heavily, his cranium taking the trauma. This will be important later.

We see several scenes of John and Stu bonding, and one of Stu choosing to be a bassist. We do not see any other Beatles until the ferry to Europe, about 15 minutes in.

We see the seedy nightlife of the Reeperbahn played to the hilt. After all, this is where the Beatles truly cut their teeth as performers, playing long shifts on stage and gaining the professionalism and artistic experience that would pay off spectacularly when they hooked up with Brian Epstein back in Britain.

And finally, we are at the Kaiserkeller, and we see Klaus Voormann and Astrid Kirchherr. John does not get along with them. Stu falls in love...

From here on, we alternate between scenes with The Beatles and scenes with Stu and Astrid (and sometimes others).

There is a Foregone Conclusion.