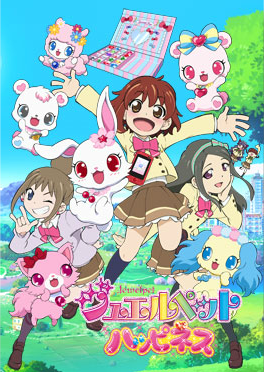 "We Jewelpets got an order from the ruler of Jewel Land, Lady Jewelina, to fill this Jewel Box with magic gems so something great will happen. 'Look for them pretty please,' she said. We became friends with three middle school girls called Chiari, Nene and Ruruka, and together we are searching for the magic gems."
— Ruby's narration
Advertisement:

Jewelpet Happiness is the fifth season of the Jewelpet anime.

It starts with Ruby and the other Jewelpets being given a mission by Jewelina to collect Happiness for a mysterious reason. Ruby and the mascots travel to Jewel Academy in order to open up a Cafe to accomplish this mission. They meet Chiari Tsukikage, an unlucky but cheerful girl who attends classes at the Jewel Academy with her friends Nene and Ruruka. Together, they manage the Cafe while collecting Magic Gems made of Happiness.

It's the first season to take place entirely in Jewel Land, with not even a passing reference to the human world. Another thing of note is that the series composition is handled by several people, credited as the Jewel Academy Literature Club.