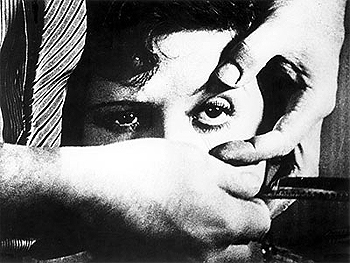 Try not to picture how this scene ends...
Advertisement:

Un Chien Andalou is a 1929 Mind Screw short silent film made by Luis Buñuel and Salvador Dalí, the father of cinematic Eye Scream, a milestone on surrealist cinema, a Real Life example of True Art Is Incomprehensible and of course of Le Film Artistique and the plot — it's indescribable at best.

The title translates to An Andalusian Dog, which if anything just makes it more confusing (Dalí's friend Lorca was Andalusian, and they had a falling-out around the production of this film, so the title might have been a Take That! at Lorca. Buñuel, however, denied this).

Compare L'Age d'Or, the second film Bunuel and Dali made together, which is only a little less weird.