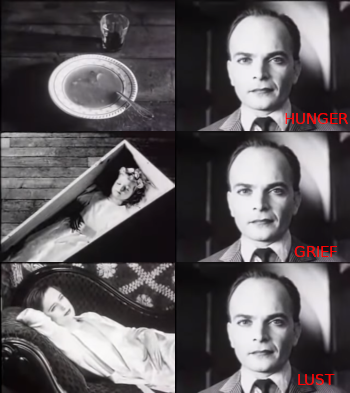 Someone give this man an Oscar!
Advertisement:

The Kuleshov Effect is a well-documented concept in film-making, discovered by Soviet film editor Lev Kuleshov in the 1920s. Kuleshov put a film together, showing the expression of an actor, edited together with a plate of soup, a dead woman, and a woman on a recliner. Audiences praised the subtle acting, showing an almost imperceptible expression of hunger, grief, or lust in turn. The reality, of course, is that the same clip of the actor's face was re-used, and the effect is created entirely by its superimposition with other images.

According to Kuleshov, this came into being largely by necessity. Soviet cinema in its early days was chronically cash-strapped. Kuleshov and other early directors trained themselves by reediting existing films, mostly movies produced in the Tsarist era. Kuleshov found that filmmakers could create an entirely new story by reordering scenes and shots, noticing this could in turn alter an audience's reaction.

More generally, the Kuleshov Effect is the basis of Soviet montage cinema, and is used in many many films since. The idea is that, by editing different things together, it is possible to create meanings that didn't exist in either of the images put together—constructing 'sentences' and 'texts' out of film.

Compare Rewatch Bonus, Acting in the Dark, Nothing Is Scarier.