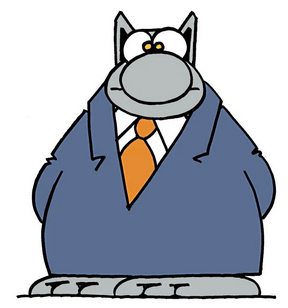 Le Chat ("The Cat") is a Belgian comedy comic strip-style (though still considered a traditional comedy comic book in Europe) series by Philippe Geluck, that started in 1983. It is notable for having a very simple, almost minimalistic art style but having very well-written humor.

It stars an anthropomorphic cat wearing a suit, tie and glasses. Most of the comics are him making a speech on many subjects and coming to a conclusion. There are many variations, and some installments don't include The Cat at all, often showing old-timey engraving realistic art with very dissonant humor dialogue/captions.