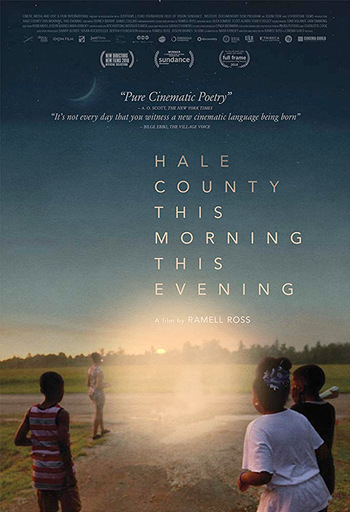 Hale County This Morning This Evening is a 2018 documentary feature film directed by RaMell Ross.

It is a portrait of African-American life in Hale County

, Alabama. Ross photographed the film periodically over the course of five years after moving to Hale County to teach basketball. The film focuses on two young black men. Quincy works at the catfish factory and is married to a woman named Boosie, and they have a son named Kyrie. Daniel is a basketball player who's trying to make the team at Selma University and has hopes of playing in the NBA.

While the film does show Quincy and Daniel's home lives and takes time for them and their family members to talk to the camera, it does not have a story line. What it really is, is an impressionistic portrait of the lives of rural black Alabamians, using experimental shots and abstract, sometimes hallucinatory imagery to show people in their everyday lives.