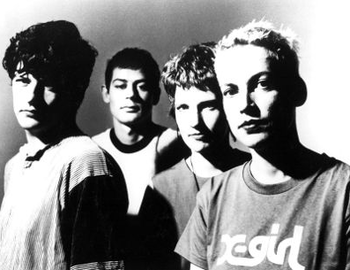 Their early sound vaguely reflected what would become their signature sound. It resembled more of early Primal Scream jangle pop. Then, after signing to 4AD records and meeting the Cocteau Twins, the band slowly morphed into a more Dream Pop oriented sound. After several acclaimed EP's, the band released their first album titled The Comforts of Madness in 1990. The album, met with critical praise and warm underground sales, found the Saints in middle of their transition to Shoegazing.

In the next two years, they would adopt Lush member Meriel Barham for a fellow vocalist. Their next album, In Ribbons, featured much more aggressive guitar riffs, while not straining too terribly far from what the band was best at.

The next two years proved to be incredibly difficult for the band. With 4AD shifting its focus on more Slowcore type bands like American Music Club and Red House Painters, the band faced even less promotion than they originally received. Frustrated, Ian Masters left the band to find more success elsewhere, and the band released its final album, Slow Buildings, in 1994. After the album flopped heavily (critically and financially), and the subsequent tour left the band with little money, the group split in 1996.

If it were somehow possible to have a Shoegazing band overshadowed by even more awesome than all the other ones who weren't My Bloody Valentine, these guys are it. With high production qualities for their day, choir-boy like vocals, and unique songwriting approaches, this band would not have been so easily passed off into the past if it weren't for 4AD's mismanagement of their albums.

The Tropes of Madness: