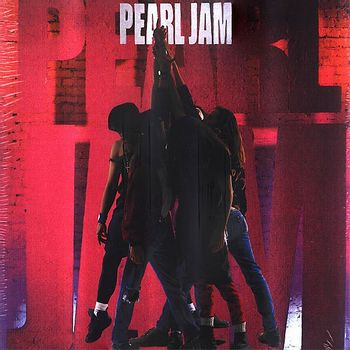 Now my bitter hands, cradle broken glass, of what was everything...
Advertisement:

Ten is the debut album by Pearl Jam, released in 1991. It was one of the defining albums of the grunge era, and quickly established the band as one of the forerunners of the Alternative Rock and Grunge explosion in the early nineties, along with R.E.M., Nirvana, Soundgarden, Alice in Chains, and The Smashing Pumpkins. The songs became well-known for their prominent and complex guitar solos, and powerfully delivered lyrics centered on abusive relationships or disturbed young people. The singles "Jeremy", "Alive", and "Even Flow" forged a distinctive niche in the mainstream for angst-filled teenagers. Even "Black", though never released as a single, became one of the most recognizable rock anthems of the nineties.

Ten remains a seminal album in the darker repertoire of alternative since it helped usher in an experimental sound that had once been relegated to the Seattle underground. However, despite its overnight critical and commercial success, the album was widely panned by Alternative Rock purists—Kurt Cobain even called the band "commercial sellouts" and claimed the album was not truly alternative since it had production such as Echoing Acoustics on it and it didn't resemble the minimalist style commonly associated with the genre. Nevertheless, Cobain would gain respect for the band following their continued experimentation on later albums Vs. and Vitalogy.