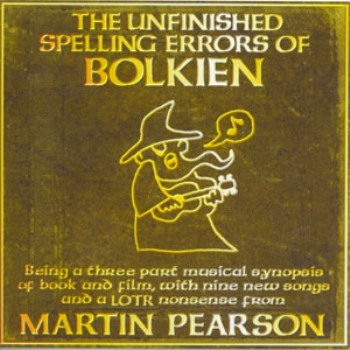 "I thought the movies were brilliant, but they would have been so much better if they'd been a musical. If they'd have considered a sort of Baz Luhrmann/Peter Jackson collaboration..."
— Martin Pearson (explaining how he came up with the show)
Advertisement:

The Unfinished Spelling Errors of Bolkien is a lovingly irreverent re-telling of The Lord of the Rings, interspersed with songs. The story sections tend to switch among pointing out the logical inconsistencies and plot holes of the story, highlighting the differences between the book and the movie, and sometimes just careening off the rails, depending on what is funniest at the time.

A live recording of the show has been released on CD

in 2004. Pearson has also officially stated

that, given the difficulty of finding the show on CD for a reasonable price, he's OK with fans torrent-downloading the show for free.

A sequel, based on The Hobbit movies, has been confirmed for release "after they come out".