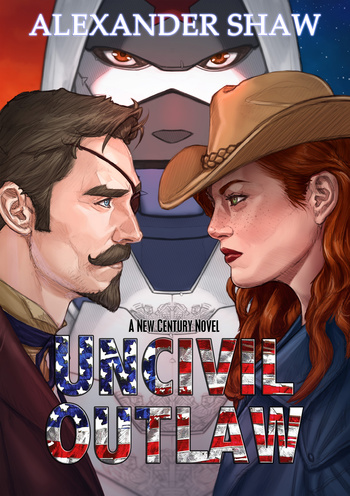 Uncivil Outlaw is an audio drama created by Alexander Shaw and is the ninth story in The New Century Multiverse, as well as the first part of Phase 2 of the overarching story.

Captain Abigail Grey is the key to securing the world of Century, by closing off every one of the portals which have led to history diverging wildly since 1872. Mister Wight, leader of an aggressive new division of the National Intelligence Agency, has given her clear orders to assist in this quarantining of an endangered planet. However, to Abigail, what will be lost if this happens is all hope and opportunity of forging allegiances with new worlds, and the struggling population will be left alone to fend off their extinction. Abigail’s long-time friend Doctor James Penrose is now caught between these two strong-willed individuals. He must decide who to back, and the wrong choice could mean disaster.

The stage is set for an epic chase across Alternate America, one that will draw in many figures from the Captain’s past as she calls on them for help. Everybody involved in this conflict will have to decide what kind of world to fight for. The continuing saga of the New Century Multiverse comes to a devastating fork in the road, and things will never be the same again.