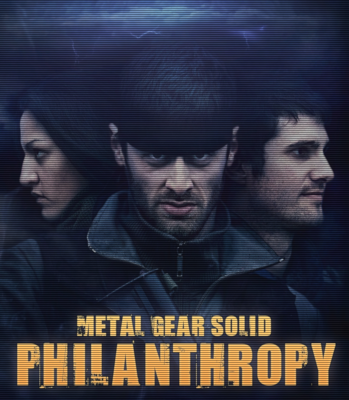 Metal Gear Solid: Philanthropy is a live-action Fan Film based on the Metal Gear series that was produced by a team of fans in Italy.

Directed by Giacomo Talamini, Philanthropy was four years and one start-over in the making. Trailers released around 2006 generated some buzz, even in gaming magazines, for the film's apparent level of quality. The film suffered a year and a half delay from its original intended release in 2008, largely due to an important location being, unbeknownst to the production crew, demolished before principal photography could be completed. The first film, The Overnight Nation, was released on September 27, 2009, and is available on the project's official website.

A second movie, The Land Where Truth Was Born, was suppose to be released on October 21, 2014, but the team was told that Konami wanted them to stop it due to complicated legal matters. A trailer/scene showing What Could Have Been can be seen here.

The plot follows the eponymous organization, Philanthropy, and their mission to end the threat Metal Gear REX knockoffs around the world pose to the balance of Mutual Assured Destruction.