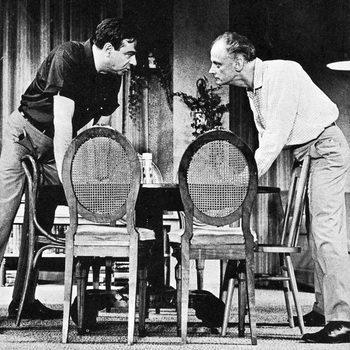 The Odd Couple is a 1965 comedy play by Neil Simon.

The premise is simple: Neat Freak newswriter Felix Ungar is kicked out by his wife, and with no place else to go must move in with his friend, sportswriter Oscar Madison, a total slob. Art Carney and Walter Matthau starred as Felix and Oscar respectively in the original, Mike Nichols-directed Broadway production.

Simon rewrote his original play twice: first in 1981 as The Female Odd Couple, a Gender Flip version of the piece, and again in 2002 as Oscar and Felix: A New Look at the Odd Couple, which is basically the original play updated with more contemporary jokes and references.