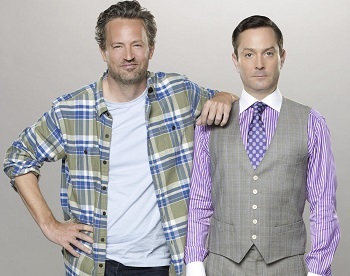 Can two divorced men share an apartment without driving each other crazy?note Matthew Perry as Oscar, Thomas Lennon as Felix.
Advertisement:

The third live-action sitcom based on Neil Simon's 1965 stage play of the same name, following the classic 1970–75 series starring Jack Klugman and Tony Randall, and the 1982–83 series The New Odd Couple. It ran on CBS for three seasons (2015–17), making it the first adaptation since the Randall-Klugman series to make it beyond a single season.

Like all previous versions of The Odd Couple, we have Oscar Madison (Matthew Perry), a sportswriter, radio host and complete slob, and Felix Unger (Thomas Lennon), the neat freak newswriter and photographer (who coincidentally works for CBSnote In the original play, Felix did work for CBS). The show explores their friendship as two diametrically opposing personalities try to live together and explore the dating scene after divorce.

Also featured in the show is Dani (Yvette Nicole Brown), Oscar's beleaguered assistant; Teddy (Wendell Pierce), Oscar's agent; and Emily (Lindsay Sloane), a resident in Oscar's building who has a badly-hidden crush on Felix and later becomes his girlfriend.