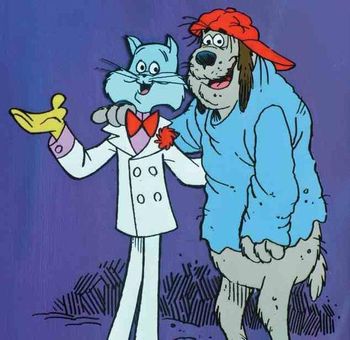 "On November 13, Spiffy was asked to remove himself from his place of residence... that request came from his master..."
"Here they are, The Oddball Couple, they're a couple, it's a couple of oddballs!"
Advertisement:

The Oddball Couple was De Patie Freleng Enterprises' Funny Animal take on Neil Simon's The Odd Couple, produced as a Saturday Morning Cartoon for ABC. It ran for two seasons, from 1975 to 1977.

Spiffy, a Neat Freak cat voiced by Frank Nelson, served as the animal Felix Unger, while the character of Oscar Madison became Fleabag, an unkempt dog voiced by Paul Winchell. As in the play, film and live-action sitcom, most of the comedy came from personality clashes between Spiffy and Fleabag, but turned Up to Eleven to take advantage of the animated format.