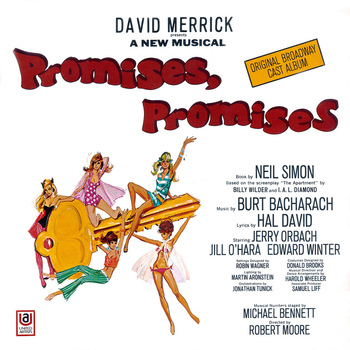 A 1968 musical adaptation of Billy Wilder's classic film The Apartment, with book by Neil Simon and songs written by the pop composer team of Burt Bacharach (music) and Hal David (lyrics). The musical follows the exploits of junior insurance executive Chuck Baxter, a hapless schmuck who attempts to work his way up the corporate ladder by allowing his superiors the use of his apartment for their romantic trysts, all while trying to win the heart of Fran Kubelik, a waitress whom he's long admired from a distance.

The show was notable for being the Bacharach-David team's only foray into musical theater—Bacharach was, by his own admission, something of a control freak regarding the show, and seemed to feel that without him personally conducting the orchestra every night, there was no guarantee the music would sound the way he intended. Regardless of how he felt about theater, the show was well-received and spawned a couple hit songs (the title number, as well as "I'll Never Fall In Love Again"). Notable among the original Broadway cast members was a 33-year old Jerry Orbach as Chuck, in a performance that won him a Tony Award.

Not to be confused with Promises! Promises!, a 1963 Sex Comedy film starring Jayne Mansfield.