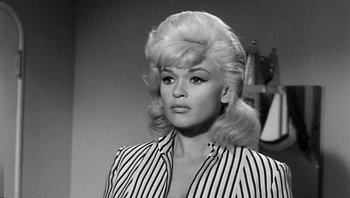 It's an Awful British Sex Comedy in every respect other than that it was an American movie. Sally (Mansfield) and Tommy (Tommy Noonan) are vacationing on a cruise ship. Tommy, a bespectacled, nebbishy writer, seems to be having problems getting it up, possibly due to performance anxiety—he is after all a bespectacled nebbish married to a voluptuous sex bomb. He goes to the ship's doctor, who, realizing that Tommy's an idiot, gives him some aspirin and tells him that it's 1963 Viagra.

The fake aphrodisiac apparently works through the power of suggestion. Sally, who desperately wants to get pregnant, visits the ship's doctor. The doctor tells Tommy, not Sally, that she isn't pregnant (1963, folks), but when Sally comes back in the office an anguished Tommy can't admit the truth and tells her that she is. Tommy panics and goes back to the doctor for more of the fake aphrodisiac.

Enter Tommy and Sally's neighbors on the cruise ship and friends, actor/weightlifter King Banner (Mickey Hargitay, Jayne Mansfield's husband, and father of their daughter Mariska Hargitay) and his Deadpan Snarker wife Claire (Marie McDonald). Tommy has a plan to use the aspirin aphrodisiac again, but after King and Claire barge in on their romantic dinner uninvited, King winds up drinking Tommy's "aphrodisiac". Through plot contrivances which include Tommy whacking his head and getting a concussion, Tommy winds up spending the evening with Claire while Sally goes to the bar for drinks with King. After Sally is determined to be pregnant for real, Tommy becomes convinced that King knocked up his wife. Tommy, who can't remember the events of that evening very well after drinking and bonking his head, also starts to suspect that he may have had sex with Claire.

One of the all-time examples of Best Known for the Fanservice. This movie, made independently outside of the studio system and thus not subject to The Hays Code, featured scenes of Jayne Mansfield topless and naked from behind. While those scenes proved very controversial they did little to resurrect Mansfield's career, which had deteriorated to nightclub appearances by the time she was tragically killed in a car wreck in 1967.

Not to be confused with Promises, Promises, a musical adaptation of the film The Apartment.