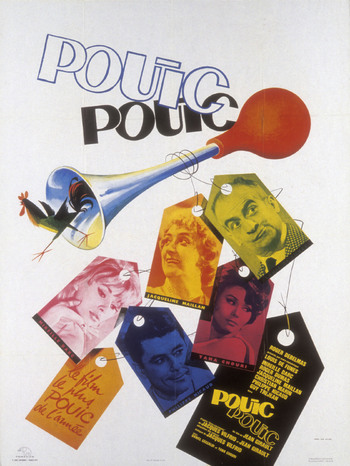 De Funes rises to stardom
"But how my Pouic-Pouic can be in the radio?"
— Cynthia Monestiernote It makes a LOT of sense in context

Patricia Monestier (Darc) is the daughter of Léonard Monestier (De Funès), a rich speculator. She is tired of Antoine's courtship. Therefore, she hires Simon Guilbaud to pretend he is her husband. Her father comes back home and he is very angry to hear that her daughter has married someone without his permission. Meanwhile, Cynthia, Léonard's wife, has bought a concession in South America as a present for her husband's birthday. Léonard is convinced she was conned by the seller, so he wants to resell the concession to Antoine. Therefore, he asks her daughter Patricia to charm Antoine and he asks Simon to pretend he is his own son coming back from South America.