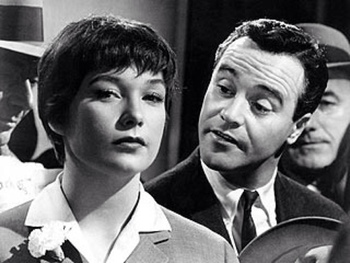 J.D. Sheldrake: You know, you see a girl a couple of times a week, just for laughs, and right away they think you're gonna divorce your wife. Now I ask you, is that fair?
C.C. Baxter: No, sir, it's very unfair... especially to your wife.
Advertisement:

The Apartment is a dramedy film released in 1960. It was directed, produced, and co-written by Billy Wilder and stars Jack Lemmon and Shirley MacLaine.

The plot concerns C.C. "Buddy Boy" Baxter (Lemmon), a lowly office drone at a big New York City insurance firm, who has just found the solution for climbing up the corporate food chain: letting various company bigwigs use his apartment as a trysting place for their extramarital affairs. His boss, J.D. Sheldrake (Fred MacMurray), discovers this, and promotes Baxter on the condition that he lets him use the apartment for his own affair. Naturally, Baxter accepts the condition, but things turn very complicated when he finds out that his crush, elevator operator Fran Kubelik (MacLaine), is Sheldrake's other woman.

Nominated for ten Oscars in all, it won five, including Best Picture, Director (Wilder), Original Screenplay (Wilder and I.A.L. Diamond), Art Direction, and Editing. The story was subsequently adapted into the 1968 stage musical Promises, Promises.