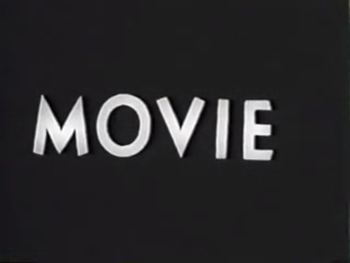 A Movie is an experimental 12-minute short film from 1958 made by Bruce Conner. Conner did not shoot any original footage, instead assembling a series of stock footage clips to make a montage. While there is no story as such, the film seems to be making a point regarding the glorification of violence and war, the overlap between military aggression and sexuality, and the futility of man's achievements. While the first part of the film shows more exciting imagery—racing cars, cowboys chasing Indians, a charging elephant—the latter portion of the film shows darker and more disturbing injury, such as a dead elephant being butchered, corpses of soldiers killed in war, the Hindenburg explosion, and nuclear bomb explosions.

Conner would go on to make several more artistic film collages over his career (ex: REPORT, using footage of JFK assassination, proto-Music Videos for Devo, David Bryne and Toni Basil) . A Movie was selected by the National Film Registry in 1994.